The 2021-22 season ended poorly for Polytechnic’s seniors, who were relegated from the sport after losing the League 2 relegation play-off. Few things predicted such an outcome at the end of last year, especially after last season’s run and in contrast to the performance in the Romanian Cup, where the white-violet reached the quarter-finals.

Politehnica finished 5th in Group A of the League 2 play-out with 28 points, after having been 15th in the regular season (21 points). Having to play a relegation play-off with FC Brasov, 5th in group B of the play-out, the white-violet team lost both games, 1-2 at “Știința” and 0-1 away.

The team’s performance in the Romanian Cup was, however, the best in the ten years of the new project. Politehnica was eliminated in the quarter-finals by first division FC Argeș, after extra time and penalty shoot-outs, scoring 4-5 (0-0, 0-0). In the previous rounds our team overcame Șoimii Lipova (2-1), Unirea Slobozia (1-0), both away, respectively Rapid București (2-0), in the last 16 at the “Dan Păltinișanu” stadium.

Interestingly, there are no major discrepancies in the players’ dry figures compared to last season. What is certain is that Politehnica still lacked a “professional” scorer. The team’s top scorer was Octavian Ursu, with five goals in the championship, plus two more in the knockout competition. He was followed by Cosmin Bîrnoi (5 goals in League 2) and the Italian Erik Gerbi (4 goals in the championship plus one in the Cup). In terms of assists, Alin Ignea and Tavi Ursu top the list with four assists each, followed by young Doru Andrei (3). The 19-year-old midfielder can be considered the revelation of an otherwise dismal season. The junior international was also the player who was present on the pitch in every League 2 game. The leader in minutes played is Rareș Lazăr (2,059), closely followed by another central midfielder – Alin Ignea (2,049).

The figures don’t tell the whole story in other respects either. Politehnica scored 30 goals, three goals more than last season’s League 2 (play-off ending). And that in a smaller number of matches (26 without Petrolul, compared to 29), while the white-violet conceded more goals – 41 (a difference of 12 compared to last season, including the result of the green-table against the Prahovenian team). The most emphatic defeats came at “U” Cluj, FK Csikszereda (both 0-3) and Metaloglobus (1-4), to which we can add that 0-3 away defeat against Petrolul. The clearest win was against Dunărea Călărași (score 3-0) at home in the play-out.

Four youngsters from the Politehnica Academy, all from the 2004 generation, made their League 2 debuts this season, in order: Tudor Moțiu, Daniel Olariu, Ervin Bakoș and Cosmin Huminic.

31 players used by Politehnica in the 2021-22 championship edition. The players’ statistics do not include the minutes played in the interrupted game lost to Petrolul Ploiești (due to night-time problems), but the two play-off games against FC Brasov.

Below you can see the figures of the blue-and-whites in terms of matches, goals and minutes scored in League 2: 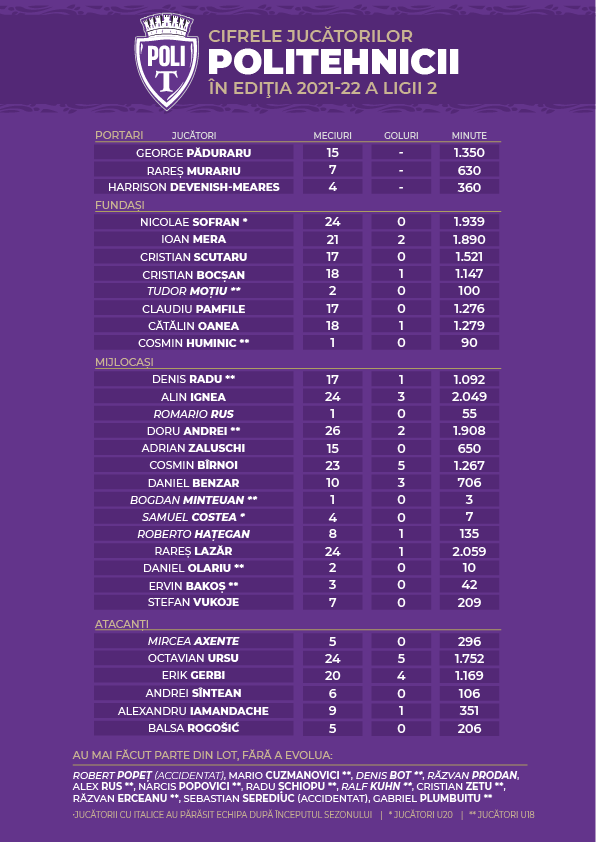